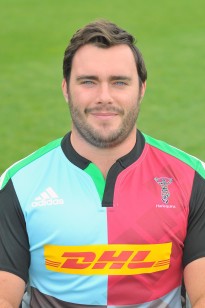 James Rosa Associates are proud to sponsor Harlequins’ tighthead prop, Will Collier for the 2014/15 season.

Managing Director Julian Donnelly said: “We are delighted to be able to sponsor Will for this season and are grateful for the opportunity to be involved with such a prestigious club. We wish Will and the rest of the team every success for the rest of the season.”